Archive for the ‘Conference’ Category

It’s been too long since our last post, so I wanted to send out an update on some of our upcoming events. Next weekend, I’ll be filling in for Francisco at the Flourish open source conference in Chicago. I’ll be talking about the Cappuccino project, the evolution of the code and the community, and about building a business around open source. If you’re in the Chicago area March 19th or 20th, stop on by, the conference is Free!

Next month, Francisco will be talking at JSConf US 2010. Following on last year’s hit conference in DC and the successful follow up in Berlin this fall, JSConf 2010 promises to be a hit event. Tom and I will also be making cameo appearances and will likely be giving talks in the alternate track.

And the last announcement for now is that we’ll be repeating our presence at Google IO this year. We’ll be showing off some cool new ways to integrate with Google services. The conference is already sold out, but if you’re going to be there be sure to stop by the developer sandbox and say hi!

Last year, we presented the first public look at Cappuccino at the AJAX Experience in Boston. This year, we’re back to talk about all the progress we’ve made.

I’ll be showing off some of the newest features in Cappuccino, as well as giving a general overview for those who may be new to the framework. I’ll also be giving a session on Atlas, our upcoming visual development tool. Finally, I’ll be giving a keynote address on developer tools, with a focus on some of the exciting new tools coming out soon.

If you’re going to be there, come see my talks for some great information about Cappuccino and web development. And if you see me, come up and say hi!

If you’re in town for WWDC, or happen to be in San Francisco already, stop by CPCoder Night on Monday for a chance to meet 280 North, Sofa, and dozens of other Cappuccino developers. It’s taking place from 7-9PM in the Martini Lounge at Jillian’s, in the Metreon across the street from Moscone West.

Thanks to sponsorship by Sofa there will be food!

If you can’t make it before 9:00 we’ll likely be hanging around the bar at Jillian’s after, but check @280north on Twitter for updates.

The Web Directions North conference is coming up Feburary 2 through the 5th in Denver. The conference includes some great sessions on the state of the art in AJAX, but it also includes two days of workshops, including Cappuccino Bootcamp. If you’re interested in learning more about Cappuccino, the JavaScript Web Framework we built to power 280 Slides, then you should come out to the conference!

As an added bonus, you can use the discount code WDN09RB at checkout time to save $50 off either the conference or just the workshop. This is a great chance to get hands on experience with Cappuccino straight from the developers. I’ll also be part of a JavaScript talk on Wednesday, in addition to the workshop, for those people who might want to learn more but aren’t interested in coding.

I’ll be posting a bit more info about the content of the workshop once we get closer to February. Hope to see you there!

280 North at Future of Web App conference in London 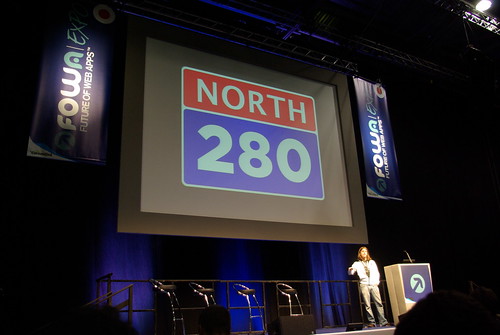 Additionally, the FOWA crew has posted video highlights from Francisco’s talk, as well as a quick interview: